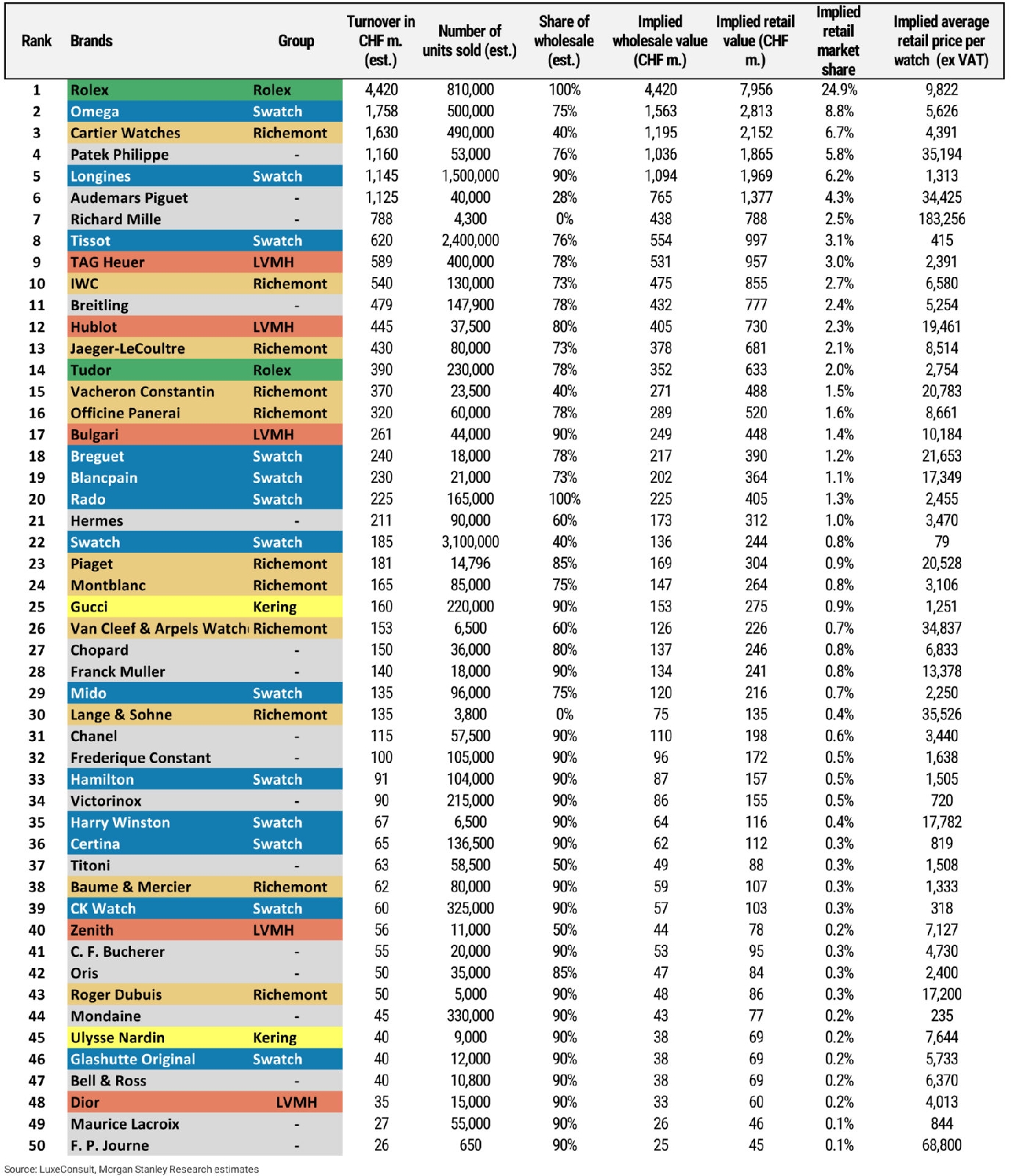 Here is the global watch sales and profit numbers or production for 2020 (forgot the source but from a watch website). Anyway, just a thought on Rolex and Longines it sold the most watches in 2020.
We used to think that their watches, even their basic Datejust or Oyster Perpetual models, were rare items making them hold their value.
Read more »
Posted by Rigval Reza at 01:33 No comments:

Stock Take, A.K.A The Seiko (and Thereabouts) Collection to Date

Some Seiko watches and the odd one from SEAC SUB (I think its an Italian dive equipment brand)  top right. The watch uses a Seiko Instruments quartz movement inside a Monnin mid size case. More on that in another post. 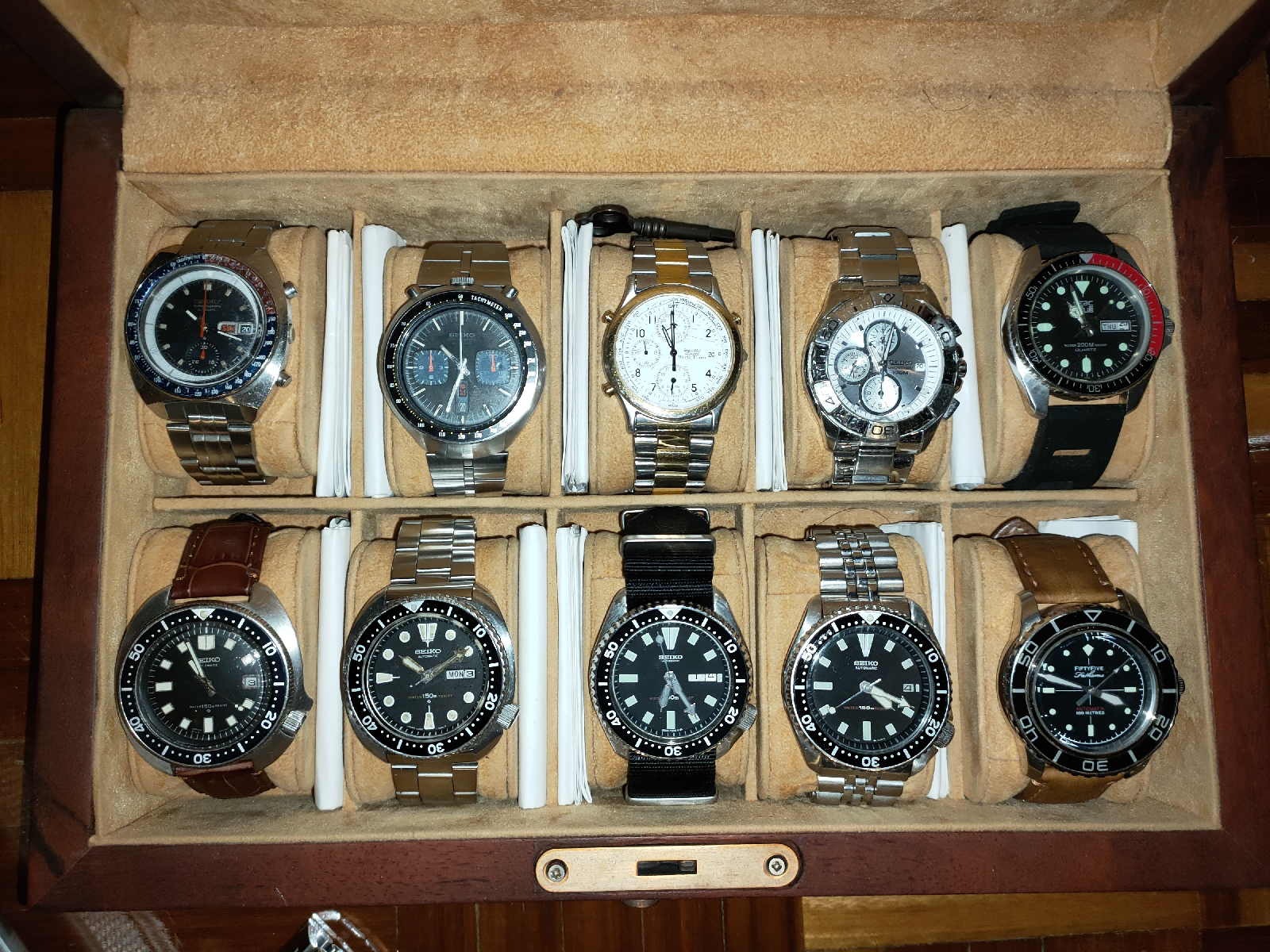 
Above is an unboxing video of my most recent acquisition - a Montecristi Panama Hat from PanamaHatsDirect.com. This is a sub-fino grade according to Panama Hats Direct and it was shipped over from Ecuador direct via DHL (cost quite a bit but secure and actually quite fast). This is my first proper Panama hat and it would go in my rotation of hats.

This isn't a review, but just the unboxing and some facts about panama hats in general, like what is a Cuenca over a Montecristi.

I will do a review of it one of these days. But in the meanwhile, do watch this video if you want to.
Posted by Rigval Reza at 18:53 2 comments: 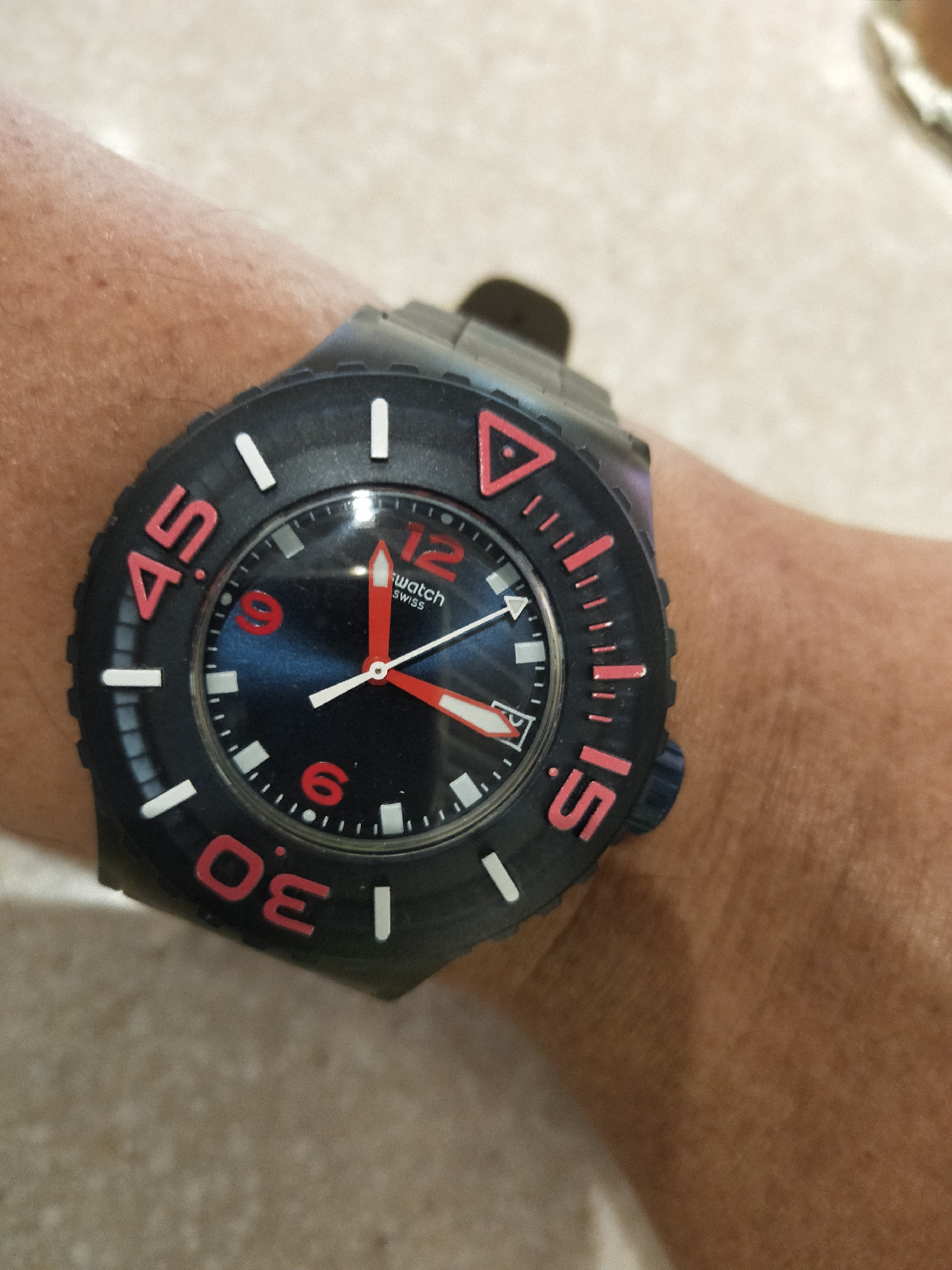 It has actually been a while since I wrote something in here. The reason is that I have not been in the mood to talk about what I've been doing or what I have tried out recently. Most likely because I feel that I have already said what needs to be said and there are not much else to say. And in terms of reviewing stuff I've bought, I have so much stuff that are merely repeats...like more watches or shoes or shirts...etc. Sometimes, you don't have the mood to write about another watch, shoes etc. It does get to you. 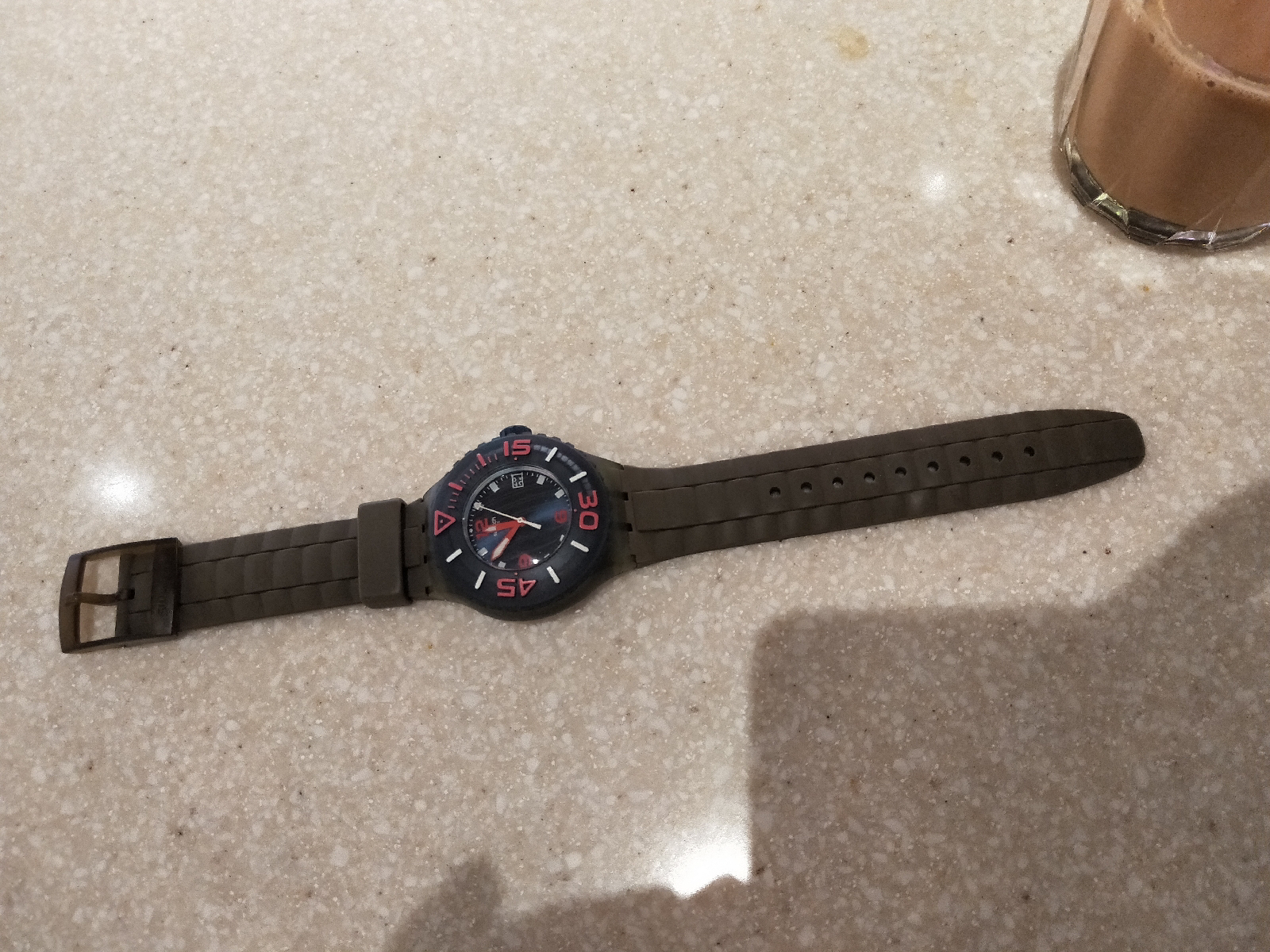 But since we've been on a coronavirus lockdown and just emerging out of it, I think that I should start writing abit. Not much, as I don't know whether i will be in the mood or not but today I am writing about the Swatch Scuba Libre which you see me wearing in the photos.
I bought this quite cheap at under RM190 or so at the Genting Premium Outlet a couple of years ago. It is Swatch's idea of a 'divers'.watch. It has a unidirectional rotating 60 minute large rotating bezel like most divers watches, it has a legible clean looking dial with clear 12, 9, 6 numerals with a date wheel at the 3 o'clock marker, and it looks chunky with it being quite tall and around 42mm diameter or thereabouts.
But it has flaws if you want to consider it as a proper divers watch. Its crown isn't a screw in type even though its rated to 20 bar or 200metres and the lume absolutely sucks. More like nothing when its dark. It is so slight that it may ne nonexistent. Lucky the hands and dial design makes it legible enough at dusk.
But because of this, it fails as a diver. However as a beater watch, it works perfectly as you can just trash the heck out of it. 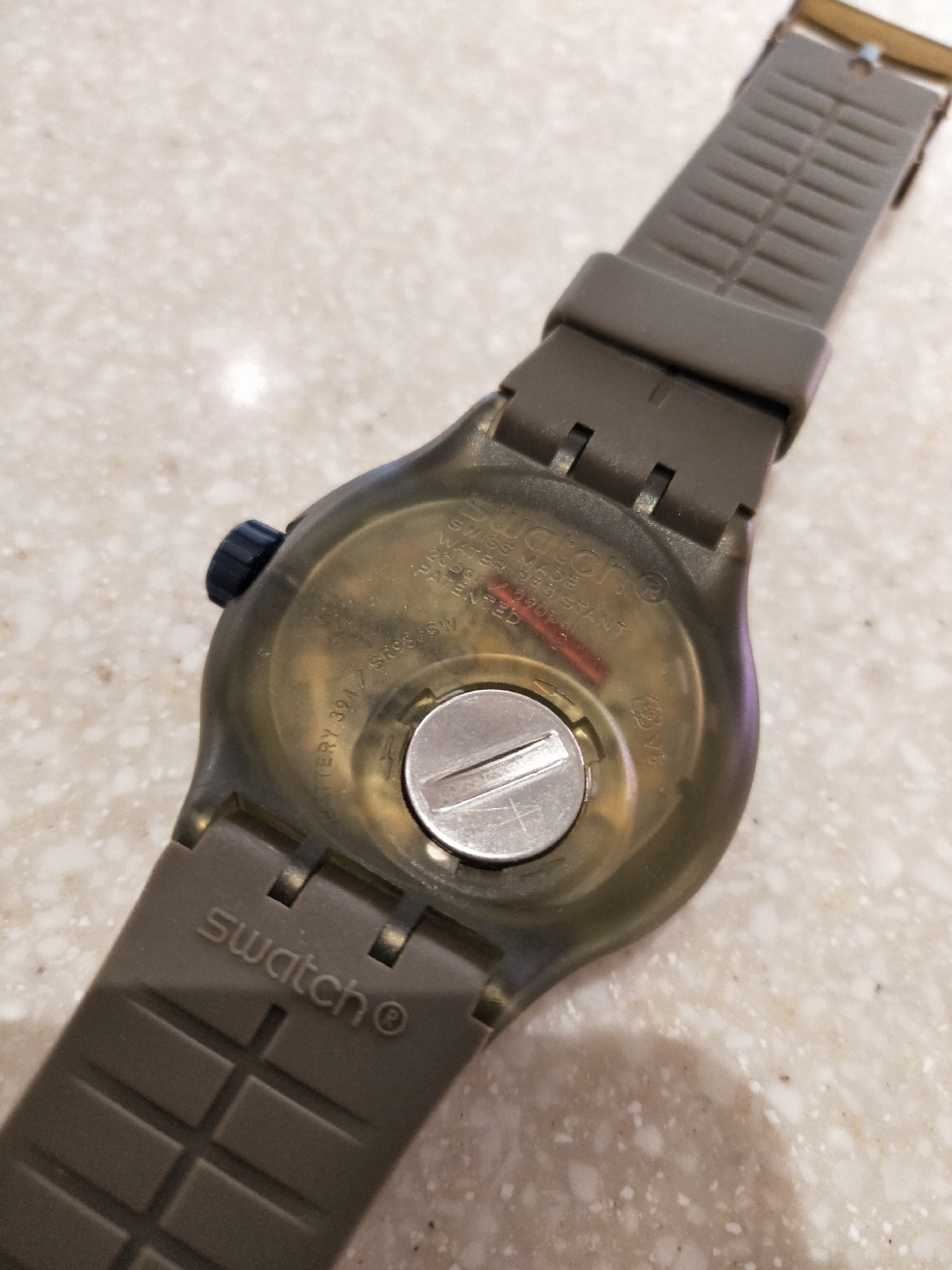 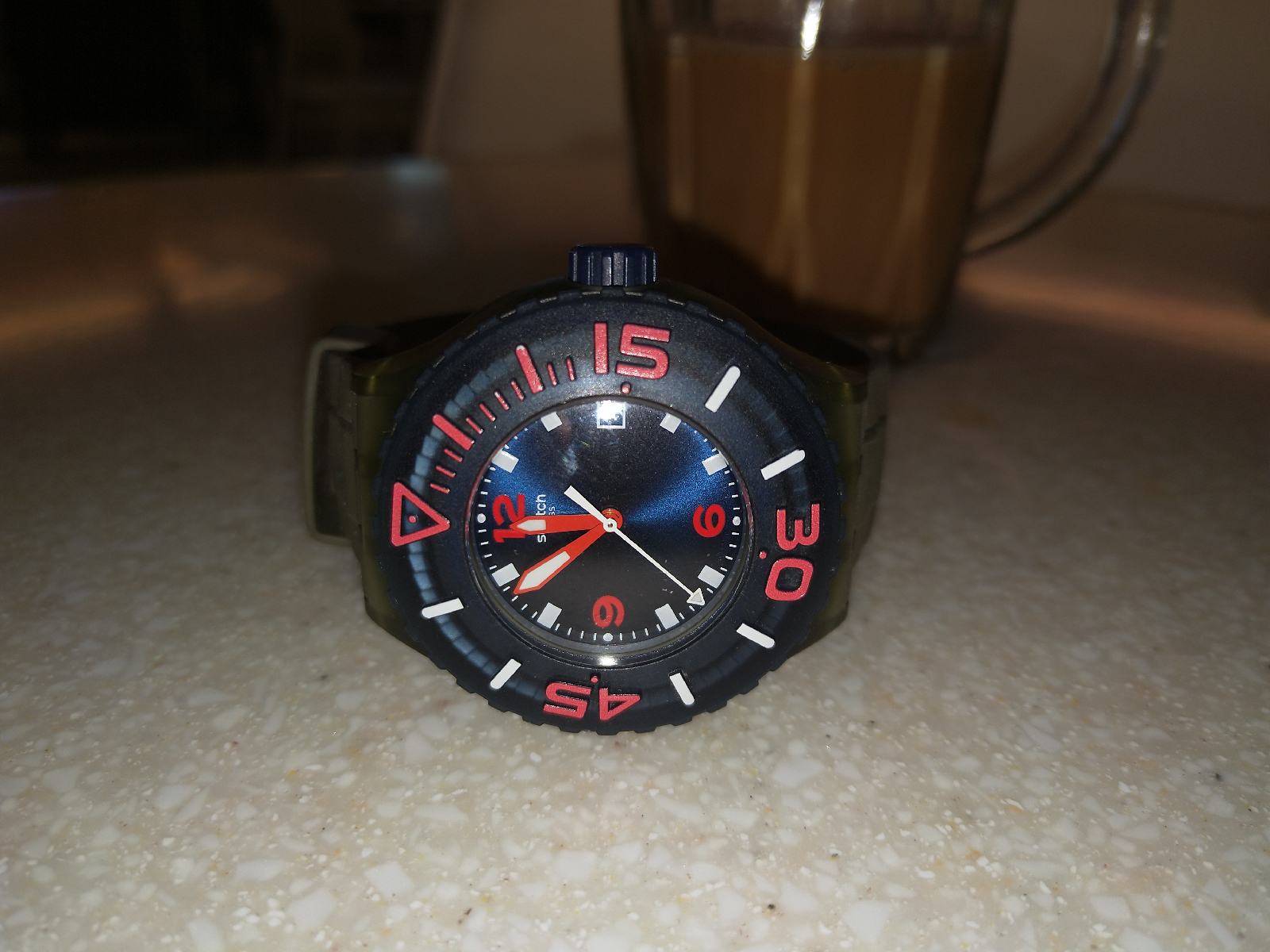 Like any basic Swatch except the Irony series it is fully plastic with exception of the quartz movement and battery cover. The crystal is a plastic one too and like all Swatches, you cannot access the movement unless you cut or break it open.
This main drawback of a Swatch is that of it breaks, you have to throw in it away. As a disposable under Rm200 watch, it would do fine. Do rough stuff with it. Go on trips overseas and it won't hurt the wallet if it gets trashed or lost. It's affordable....To some people that is.
I like the Scuba Libre in that it looks like it took design cues from some trad 1950s diver watch in terms of dial and beEp design with deliberate funkier font sizes and bezel. And everything is plastic of course.
It looks like what a Blancpain Fifty Fathoms would look like if it were plastic....if there was such a thing. With its slightly curved bezel and all. Surprisingly, I think that this line isn't too popular as I can't seem to find many people wearing them or Swatch stores keeping them in stock.
I think if I threw in a tan leather strap it would look its part. The only issie is that the Swatch only lug design requires a Swatch style strap. Since it's a beater watch, I am not too bothered to pimp it up. Yet. 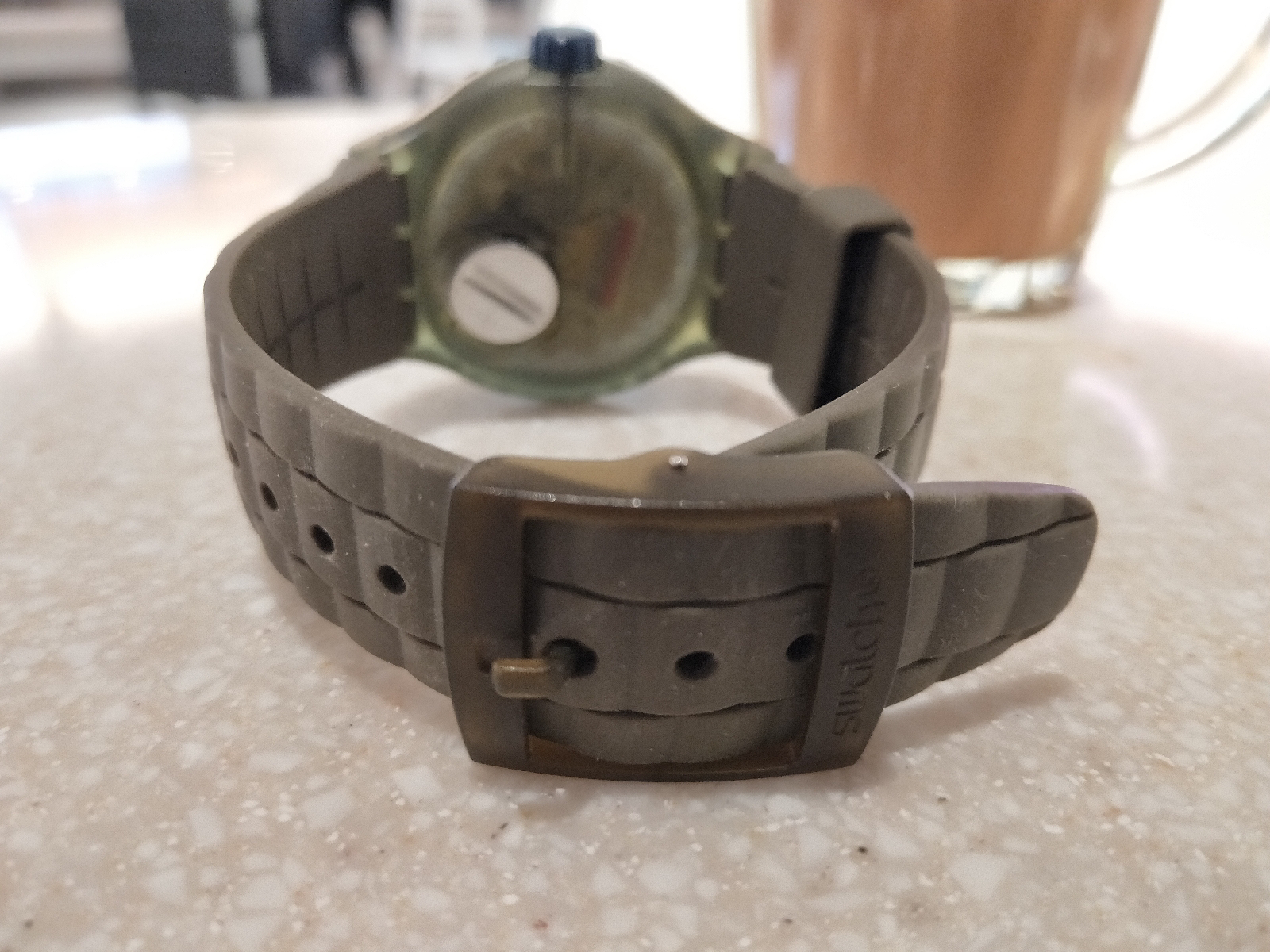 One reason is that since the pandemic lockdown period, this watch is the only one seeing a lot of wrist time when I go out. Since its all plastic it does not get affected with all the lathering of alcohol based hand sanitizers which eventually could do damage to my leather and NATO nylon strap which are usually affixed to my watches.
As alcohol is corrosive, a beater watch is quite convinient to wear in times like these. So the Scuba Libre gets used often. 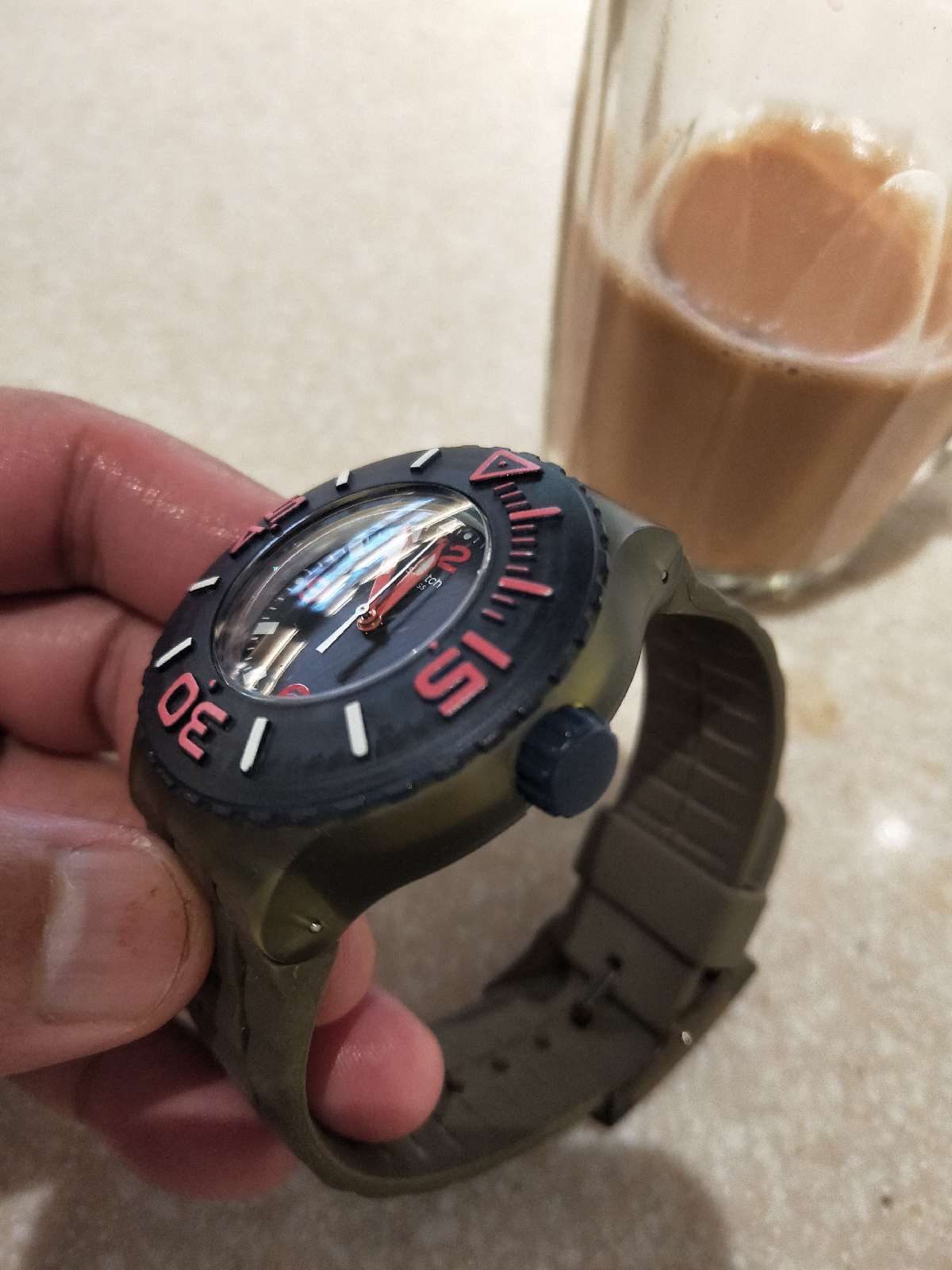 Since there are less events or functions for me to attend, I usually go about in a polo t-shirt and cotton khakis. So not much dressing to really do and I do not go out much except to the grocers or for some other essential stuff. So this watch will suffice for now.
I however must say that while this is quite good as it has an analogue dial, a Casio Dw5600 Series G-shock with all of its digital could be a better buy and a better beater watch. It is the only G-shock which I like. It was the one used by Keanu Reeves in Speed and while as disposable as this, its case, or bezel can be replaced of it is cracked. Actually you can access the quartz movement too....which is always a plus point as you could get the movement replaced if it stops working.
I have one. But my daughter has taken a liking to it and wears it quite a bit. Must go get another.
Posted by Rigval Reza at 12:01 No comments:

Video: The Land Rover Above and Beyond Drive Experience - Testing the Land Rover Discovery Sport and Range Rover Velar 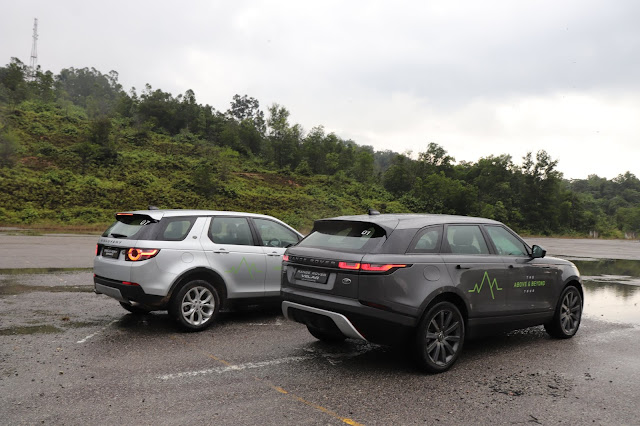 Hello again folks. I have been busy elsewhere. You guys know that I have a motoring website don't you? Motoring-Malaysia is where I do most of my writing these days and also a lot of videography. Maybe one of these days I will actually blog or write about how I have been producing my videos. It has been a one man operation to date and I usually record and edit everything on my own. Which is why I have been busy with this one featuring the Land Rover Above and Beyond Drive Experience with the 2019 Land Rover Discovery Sport and the 2019 Range Rover Velar. 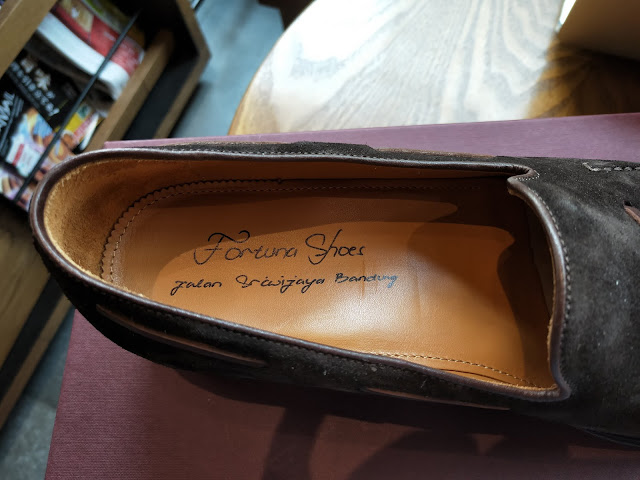 I actually shot this video at a Starbucks in Ara Damansara, Petaling Jaya. My friend, Azidi just got back from Bandung, Indonesia and he bought this pair of tasseled loafers from Fortuna Shoes there. If you guys have been following shoe forums here and there, you may have heard of them. PT Fortuna could be one of the best shoes ever produced by Indonesia in terms of quality and overseas exports. 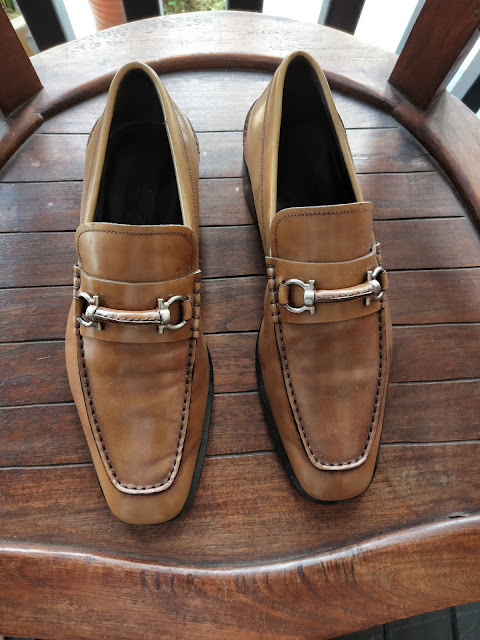 I am back for a short article folks! I have been busy with my Motoring Malaysia blog and its YouTube channel. We have been testing lots of cars over there and if you like cars, trucks and buses you should head over there. But here is a follow up post on the pair of Ferragamo shoes that basically died due to its rubber sole deteriorating. I've got them fixed.
Read more »
Posted by Rigval Reza at 23:20 No comments:

A close friend of mine was in Ho Chi Minh City recently and he actually bought two pairs of Fugashin Saigon shoes. From these two photos... 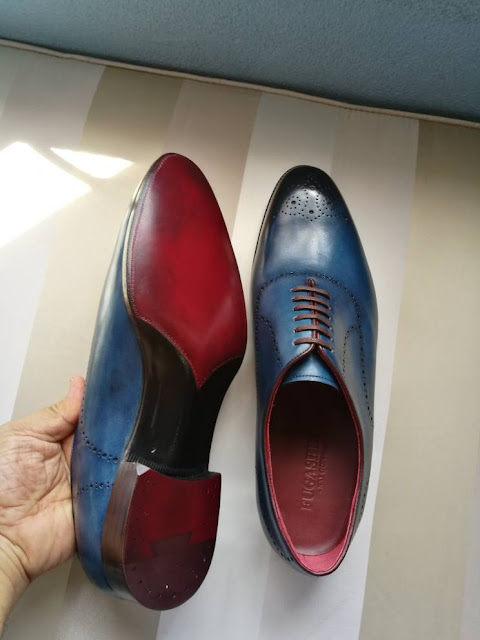 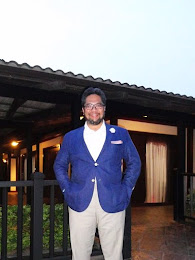 Dressing up in the tropics...it can be done